A few weeks ago, I was not sure I would ever see my papa again.  After having his pacemaker replaced, he developed an infection and landed back in the hospital.  He seemed to be failing quickly.

I had not seen him since September due to the travel restrictions; he lives an hour away but in a different state.  It broke my heart because in the hospital he was all alone because no one could visit him.

However, he is quite the fighter at 94.  He is back living in his own home with 24-hour care.

Over February break with extra testing in place, I was able to visit him.

When I arrived, he was already perched on his stool cutting onions and garlic and measuring spices.  His eyes sparkled because we planned to do something he loves - cooking.  We were making his Italian bean soup.

After a brief hello, he put me right to work.

He wanted to teach me to cook it his way as he is pretty particular about certain things.

I had to put a bag in the crockpot to reduce the mess.  I could not hit the side of the pot to get the sauce off the spoon.  I had to wash the cans of tomato sauce and black beans out with water and dump it in the pot to use up all the juices.  Nothing was to be wasted.  I had to break the spaghetti into strips about 1.5 inches long.  Although, he did say it was okay if a few were not the right size.  I could just throw them in the soup.

He watched me with a careful eye, guiding me with his loud hoarse voice.

As I was sitting next to him breaking the pasta, he took the time to write out his recipe by hand for me to take home.  He even gave me a 5-star rating.  He does not give out his cooking secrets to many, so I felt pretty special. 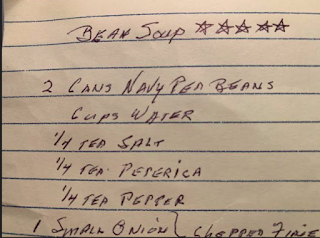 I also felt incredibly lucky.  I do realize how fortunate I am to still have my papa.  Not many people my age have grandparents still living.  While he can’t walk on his own, he can still do some of the things he enjoys, and he is still sharp as a tack.

Eventually, we had to move to the den because his legs were swelling.  We enjoyed some quiet moments together and talked of the past and compared some of our memories, in particular his advice to me on love.  Finally, he swore he will be able to walk again and live on his own.  I love the fire he still has in his spirit; it keeps him going.

I look forward to our next cooking session.  I wonder what recipe he will pass down to me next and what memories we will dredge up to share with each other.