My first task upon entering my classroom is to hunt for this fish, not feed it but find it.  It likes to hide, usually behind the filter.

However, yesterday, it was NOT behind the filter.

The hunt began with me contorting my body and head to look inside the blocks in the tank.  The clerk at the store said that Betta fish like to swim through things.  He could have mentioned they also like to hide inside them.

My face was right up to the tank with my head upside down trying to see if he had floated to the top of the block.  Ever since the day I bought him, I have been afraid he would die.

He was not there.  I gave up for a bit and got ready for class but kept glancing over to see if he had appeared.

Next round - I got my ruler, took the lid off the tank, and plunged it into the water.  I jostled the block around, but no fish came out.  I peered into the filter.  Nothing.  I looked around outside the tank thinking someone might have taken him out (grasping at straws there).  Of course, there was no sign of a fishnapping.

I sat back down feeling frustrated. I was thankful it was remote Monday because the first thing the students do when they enter class is check the fish.

I was not sure how much time had passed, but I looked up, and there he was just hanging out in the middle of the tank.  He was alive! 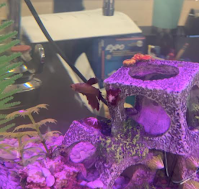 Every day, I go through this.  He torments me by hiding, blending in, and not moving.  Even when we can see him, the students want proof of life, so I take the filter out to make him move around the tank.

Fish, who will be named soon, I’ve figured you out.  I’m putting my ruler away.  There will be no more fish hunting for me.

I am excited to be participating in the Two Writing Teachers March Slice of Life Challenge! 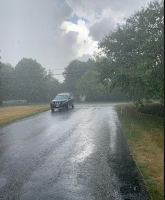