The Fish Who Was Finally Named #SOL21

The fish is the talk of the hallway.  Kids and teachers stop by to check on him and still ask for proof of life.  I had to remove the filter the other day to make him swish his fins.  The assistant principal fed him on remote Monday and searched for him to send me a picture to verify he was still alive.  Well, needless to say, he was hiding from her.

Yesterday, we announced the names of the fish and the moss ball.

All of my students had input.  I created a Google Form for them to suggest names.  A few students took the initiative and made posters, rallying for their names.  Others created class text groups to coordinate suggestions.

Nest, I picked the top four names for each.  For the fish, the names were Pablo, Damon, Riptide, and Bubbles.  The moss ball names were not as diverse - Mossy, Randy Moss, Dumpy, and Bobby.  The students then voted on another Google Form. 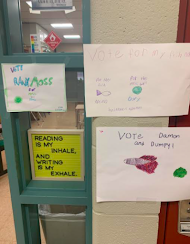 The students were buzzing.  Another poster showed up outside my doorway.  Kids stopped by throughout the day to check on the pie graph results.  I, literally, had to stop a group of sixth-grade boys from hugging when they saw their names pulling ahead in the race.

The kids have waited patiently for the reveal, and most of the students seemed pleased with the results.  The Betta is Riptide, and the moss ball is Randy Moss.

My eighth-graders took it pretty coolly.  They nodded their heads in approval.

In my seventh grade class, a student wanted to make the announcement.  There was a little more enthusiasm in those classes.  I heard some say, "I like Riptide; that's a good name."  There were smiles and fist pumps.  Others were disappointed their names did not win.

However, the sixth graders were a bit more ceremonious.  In one class, all seven students stood, crouched over their desks, and created a drum roll.  When they heard the names, there were shouts of glee and jumping up and down, for it was these sixth-grade students who campaigned the hardest for these two names.

The plans keep rolling in from the students.  Apparently, there are beds for Betta fish that stick to the wall of the tank.  Maybe he will come out more often if he had a bed.  A student suggested that I might want to invest in a heater because the water might be too cold for him.

They want to add more critters to the tank.  A snail would help clean the bottom of the tank, and I learned that there is something called a sucker that would keep the sides of the tank clean.  I was also informed shrimp cohabitate well with moss balls.

I love the energy this little guy has generated, and his antics create some great discussions.

The Path Beneath My Feet #SOL21

In preparation for a poetry class, I have been outside observing what is within 100 yards of my doorway.  It is amazing what one will see w...