Bucky the Badger is going on one last adventure. 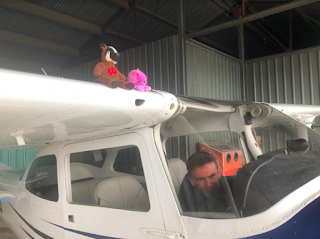 Who would have thought this stuffed animal story would come full circle?  Certainly not me!

In February 2011, my husband was on a business trip at the University of Wisconsin, and Tom, a university professor, gifted him a small stuffed animal of the school's mascot, Bucky the Badger.

When Scott returned home, he promptly took Bucky out of his bag and gave it to Ashely.  She loved stuffed animals, and Bucky became her most prized stuffy.

Scott frequently traveled at that time, so Ashley decided to send Bucky with him on his trips as a reminder of home.  To let her know he was thinking of her, Scott would send pictures of Bucky at various landmarks and text them to Ashley at the end of the day.  Oh, how she looked forward to seeing his adventures each night.

Bucky is one lucky stuffy.  He sat on a tiger in South Africa, drank beer with the guys in Belgium, visited Prague, walked the fields in Ireland, crossed Penny Lane, crossed the U. S. to Seattle, and those are just a few of his adventures.

Now, he is taking one last flight with Scott in a small Cessna plane in Westfield with Cam as the pilot.  In two weeks' time, he will finally return home to the University of Wisconsin, but this time, he will be traveling with Ashley.

Memories will now be made with her, and I sure hope Ashley will send us photos of their next chapter together.